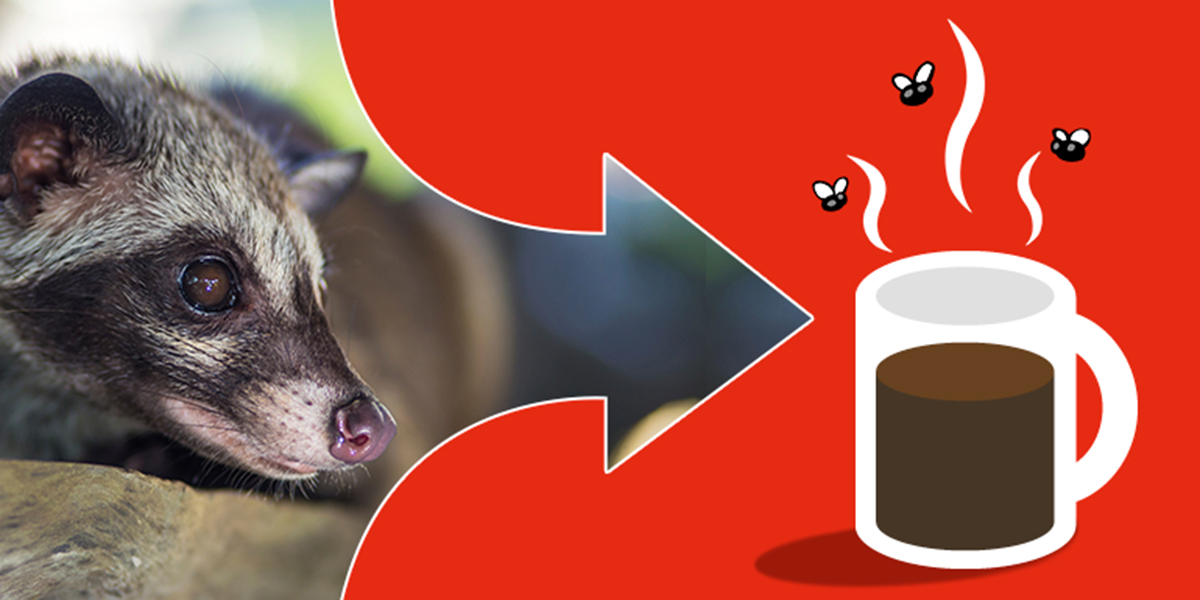 Seriously?! Yip, that’s not a typo. Believe it or not, the world’s most expensive coffee, we repeat, the world’s most expensive coffee is made from cat poo. Literally! So this week, we thought we’d spill the beans (sorry!) about this strange yet coveted beverage but before we go on, we should perhaps point out that it’s not a drink you’ll find at Jones Brothers Coffee any time soon!

Kopi Luwak, as it’s called, hails from the Indonesian island of Sumatra and has been around since the Dutch colonial era 350 years ago. You see, when the Dutch came to Indonesia, they saw the potential for good plantations there, thanks to Indonesia’s rich, fertile soils. At the time, the coffee crop had yet to be discovered but the Dutch set about creating large coffee plantations in the Dutch East Indies islands of Sumatra and Java.
As the story goes, the Dutch colonists used native Indonesian farmers to work the coffee plantations and pick coffee fruits for production but they prohibited the Indonesian farmers to pick and harvest the coffee fruits for their own personal use. As a result, the Indonesian farmers discovered a new way to enjoy and drink coffee on the discovery that a small squirrel-like cat called the Asian Civet, which prowled the local coffee plantations at night, ate the Arabica coffee fruits and left the coffee beans undigested in their poop. The farmers began to collect these coffee beans, clean them, roast them and brew their own coffee… in other words, the cats ate the berries, didn’t digest them, passed them and then the faeces was cleaned, dried and roasted. (We do hope you’re not sipping on a cup of CP’s beautiful beans as you read this!) Eventually, the aroma caught the attention of the Dutch colonists and plantation owners and it became a sought after coffee in its own right.

The twist in the tale

Where the twist in the tale lies is that in reality, the millionaire coffee sippers who think they’re slurping on kopi luwak often aren’t. You see, it’s practically impossible to find genuine wild kopi luwak. The only way to guarantee that would be to actually follow a Luwak around all night yourself so what most people spend a fortune buying has been commercially made using caged civets. Force-fed coffee cherries in order to literally crap the beans, in turn, they become the pleasure of those of can afford it. Suddenly kopi luwak loses its rare and wild label for an industrialised and highly commercial one!

Official reports claim that only 500 kilos are collected a year, a scarcity that explains its huge retail price tag of up to $US 400 a kilo and sometimes more but one single Indonesian farm alone claims to produce 7,000 kilos a year from 240 caged civets and coffee producers in India, Vietnam, China and the Philippines have also jumped on the bandwagon. Add to this the Thai elephants, Brazilian jacu birds and Bonobo monkeys who have all been press-ganged into satisfying the insatiable desire for this weird and supposedly wonderful luxury coffee. These other animals, however, don’t have the anal glands of the genuine luwak, which is what lends kopi luwak its distinctive flavour. So is the only virtue of this coffee the gimmick of their production method?

Give it a try if ever you have the chance although you may need to take out a bank loan to do so. Alternatively, you can buy quite a lot of that other world’s best coffee called Jones Brothers Coffee. Your call!

« Start with a great coffee grinder! | The History of Coffee »