Preparing and drinking coffee in Ethiopia is a whole ceremony. Today we’re revealing a bit more about the Ethiopian ritual of drinking coffee. Read more!

Did you know that coffee in Ethopia isn’t just a drink? It’s actually an essential component of Ethiopian culture and society. It’s a community thing and a conversation starter. Being invited for coffee in Ethiopian culture is considered a symbol of friendship, respect and great hospitality. Preparing and drinking it - a whole ceremony. Today we’re revealing a bit more about the Ethiopian ritual of drinking coffee. (Spoiler: It involves popcorn!)

The Ethiopian coffee ceremony begins with green (or raw) coffee beans that are freshly roasted over a small fire. A long handled pan helps to slowly shake the coffee beans to keep them from burning. They are roasted until the beans start to pop and crack. After a few minutes the beans start to produce a fresh nutty fragrance. The hostess then walks the roasted coffee around the room so that the smell can be appreciated by the guests.

Once the beans are fully roasted, traditionally they were ground using a pestle and mortar but today in the modern world, a special kind of automatic pestle is used. The coffee powder is then added into a special Ethiopian clay pot called a “Jebena” (Pronounced as Jabena) with water and placed on the fire. Brewing Ethiopian coffee takes time. The coffee pot is heated to boiling point multiple times. The taste is checked by the hostess before it’s poured into the cups.

How coffee is served is a vital part of the ceremony. The coffee grounds are brewed and served three times – each serving has a name. Once the coffee is ready, it is served in small cups called “Cini” (pronounced as sini), that is the first serving called “Abol”. The “Jabena” is back on the fire brewing coffee for a second serving which is called “Tona”. The third serving is called “Bereka” and at this point the coffee is not very strong. Coffee is mostly served with popcorn. 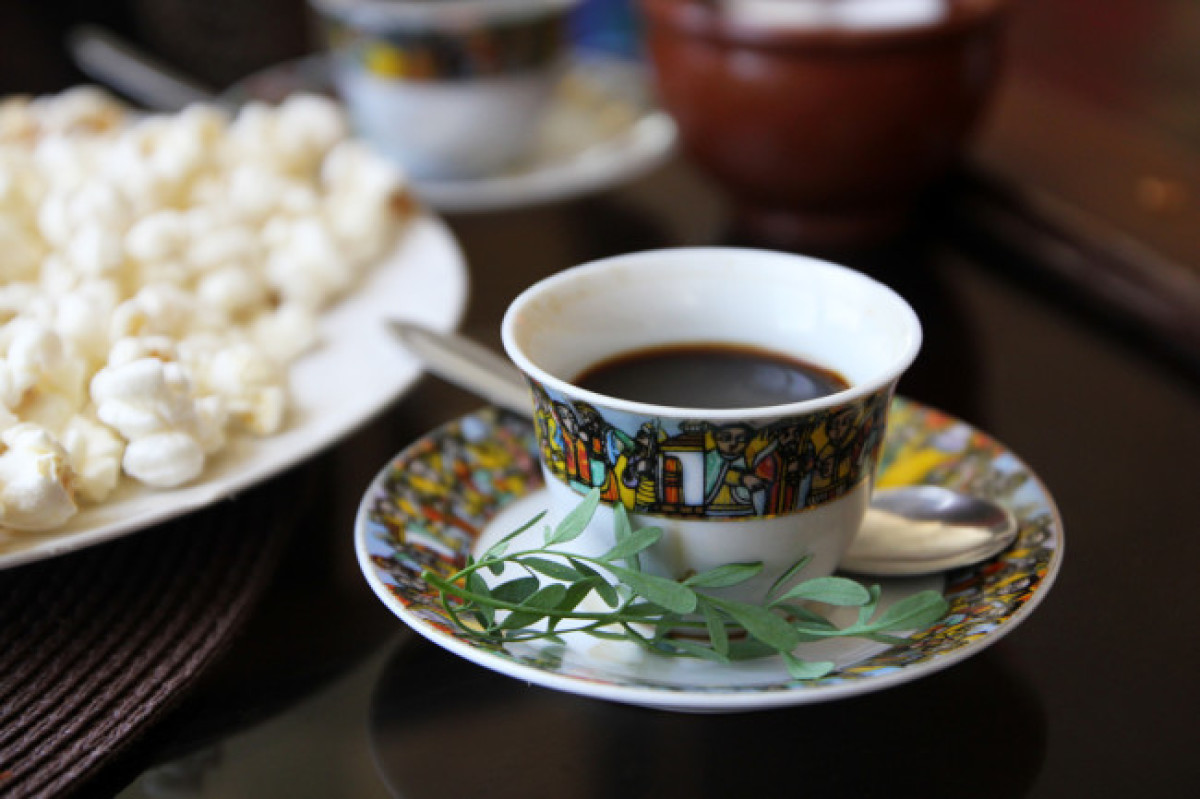 Many Ethiopians prefer to drink their coffee black with a small spoon of sugar. Interesting enough it can also be drunk with salt, milk or butter.

Interesting to know! In Ethiopia, it is important to drink coffee in each of the serving. Denying coffee at any serving is considered rude.

Love what we brew!