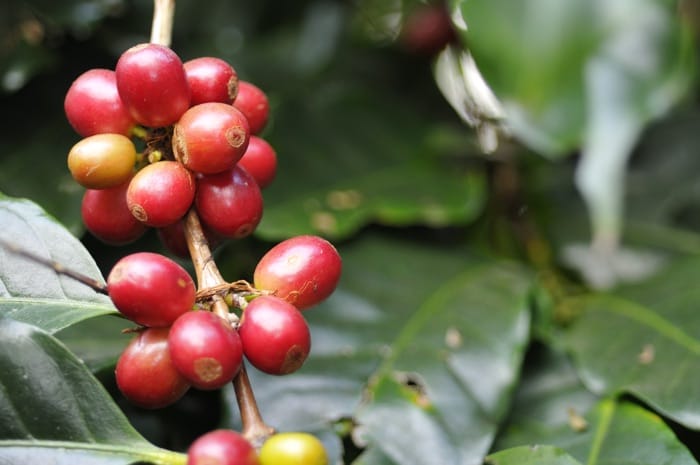 As you warm your hands and your soul from your morning coffee, do you ever think about where that coffee has come from and what it takes to get it to you? I have seen it at first hand and so I am going to take you on that journey from the time of Harvest to the cup in your hand. Somewhere around the world right now, coffee is being harvested, although it varies by country and by climate. In this first part of my exploration of the nurture and journey of the humble coffee bean, we’re just talking about the ‘Bean’.

Let’s first look at the ‘bean’

A coffee bean is actually a seed. When dried, roasted and ground, it is used to brew coffee. But if the seed is not ‘processed’, it can be planted and will grow into a coffee tree. Depending on the variety, it takes approximately 3 to 4 years for newly planted coffee trees to begin to bear fruit.  The fruit, called the ‘coffee cherry’, turns a bright, deep red when it is ripe and ready to be harvested. (would be great to get a great image of a handful of ripened cherries here)

Approximately seven million tons of the raw green coffee is produced worldwide each year. The two best known and important species of coffee are Arabica – which accounts for over 60 percent of world production – and Robusta. Two other species which are grown on a much smaller scale are Liberica and Excelsa coffee.

At Jones Brothers Coffee, we are most interested in Arabica coffee – it’s our favourite and it’s the best for flavour – it is grown throughout Latin America, in Central and East Africa, in India and to some extent in Indonesia. It is a shrub-like tree, native to Africa and Asia, bears small white blossoms that look and smell like jasmine flowers. When the tree is three to five years old, it will bear fruit that resemble ripe cherries. Most of these fruits have two coffee beans inside, although a small percentage will contain a single bean, also known as a ‘peaberry’.

Robusta coffee (the one we don’t like so much!) is grown at much lower altitudes (from sea level to 3000 feet) in an area 10° North and South of the equator.  It is much more tolerant to warm conditions than Arabica coffee. It is less flavoursome and is typically used in Italian style coffees.

Next time we are preparing for the harvest…in Brazil!

Love what we brew!
The bean team

« Coffee and creativity | When is the harvesting time for coffee beans? »