ETHIOPIA – A WHOLE WORLD OF COFFEE IN ONE COUNTRY PT 2

We are committed coffee enthusiasts at Jones Brothers and one of our most favourite regions is Ethiopia. But there is so much more to Ethiopia than meets the eye. This country of 110 million people is diverse in its ethnic groups, its cultural influences and its coffee landscapes. Let’s explore these different coffee regions a bit more.

Coffee is mainly produced in the south, south-western and southeastern parts of the country in the Oromia region and Southern Nations, Nationalities and People Regions (SNNPR), mostly by smallholder farmers on farms and plots of less than 2 hectares on average. These producers supply about 95% of the country’s total production. The coffee growing areas are divided into different regions, each maintaining their distinct flavour characteristics.

Understanding the naming of coffees in Ethiopia is complex and often confusing so I will attempt to explain what they are and their different characteristics, but I will focus mainly on the South Ethiopia regions, which is my greater area of knowledge.

Ethiopia has an extremely regulated coffee grading and naming system and, as with many things in the country, the government has the final say about what any particular lot of coffee can be called. I visited a local government quality control laboratory in Addis Ababa during my last trip to Ethiopia, where they grade, roast and cup a sample of every export lot waiting for shipment and give it its final designation. They cup sometimes just in this one lab up to 150 different coffees a day!

Historically there has been a very well defined and controlled list of names that could be used for the regional coffees. The map below shows the main coffee growing regions of Ethiopia and the names that are assigned to them. All our Ethiopian coffees currently at Jones Brothers come from the south and south-west of the country – the area at the bottom centre of the map labelled Sidamo with Yirgacheffe in the centre, and for us in 2019 Jimma, slightly to the West. 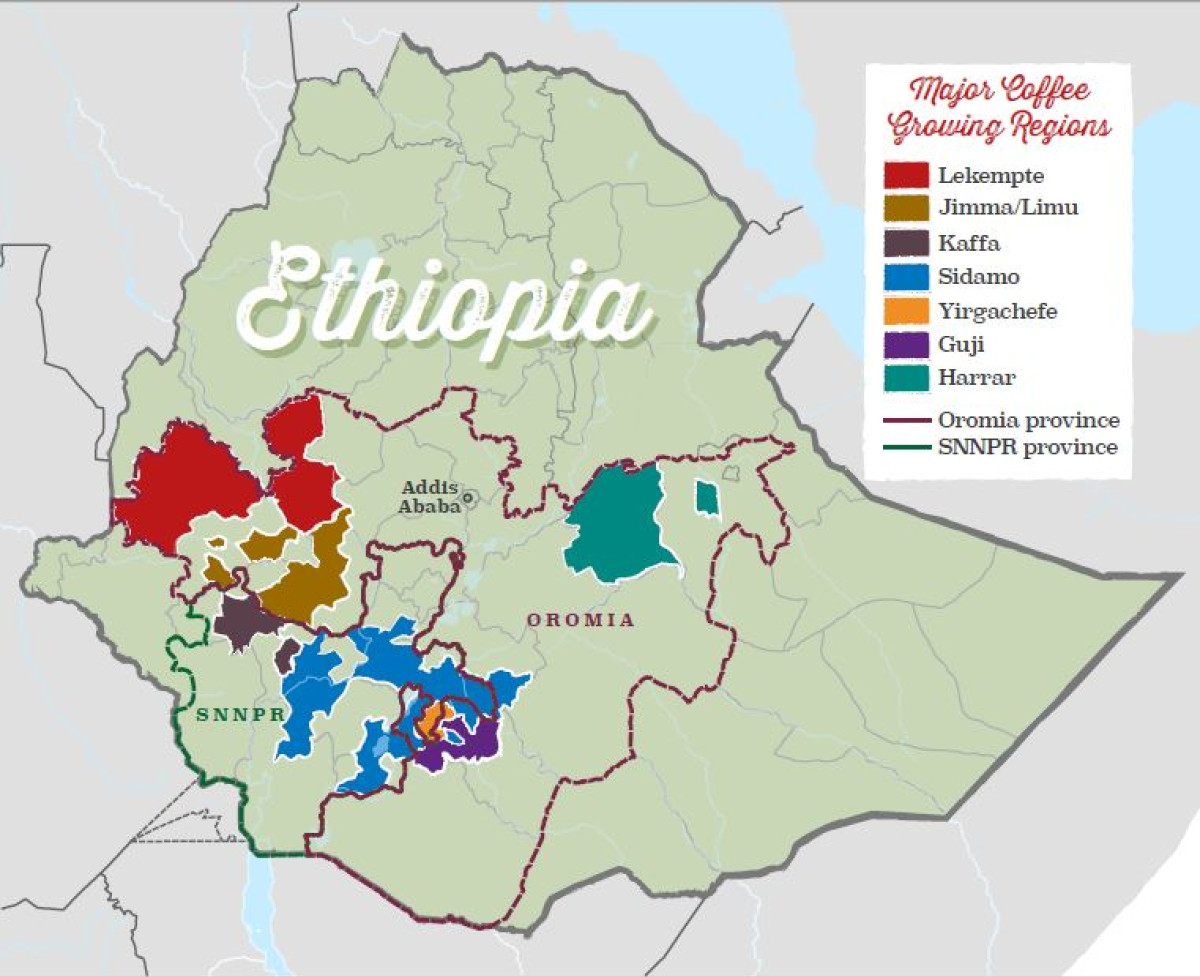 As the map shows, the coffee growing areas in the Sidamo region are quite spread out and distinct from each other geographically, but they are also quite distinct ethnically. The reason that all the coffee from these areas is called Sidamo is that before 1995 they used to lie within the province of Sidamo which was named for the Sidama people who inhabited part of the greater territory. In 1995 the old system of provinces was replaced by a system of ethnically based regions and Sidamo province was swallowed up by the newly created Oromia region, named after the dominant ethnic group. About half of the area that traditionally produced Sidamo coffee now lies within the Oromia region while the rest is now in the so-called Southern Nations, Nationalities and Peoples Region.

The coffees produced in these areas have always been marketed as either Sidamo or Yirgacheffe, and until a few years ago were only available (for the export market at least) in washed grades. But things have been changing in recent times and some of the producers feel that their coffee is sufficiently different from their neighbour’s coffee to be called something different. Ethiopia is a very diverse country and has more than 80 different ethnic groups who are fiercely and proudly tribal. In the coffee growing lands of the former Sidamo province, the three main ethnic groups are the Sidama, the Gedeo and the Oromo –which includes the subtribes Guji Oromo and Borena Oromo. These groups have always lived next to each other and have much in common, but there are differences in the coffee they produce, and the Oromo farmers want their coffee to carry their own name – not the name of another tribe. Now it seems that the government is relenting and beginning to relax the system to allow new designations.

It’s not making it any easier for the average coffee drinker to understand. But it is providing us with a fascinating choice of individual coffees right down to the farm and field level. Such is the diversity of the landscapes and climates across this large country that we are yet to discover the full possibilities that Ethiopia coffee has to offer I think. And that’s exciting!

In my next article I will talk more specifically about how we are exploring and extending our knowledge and range of coffees from Ethiopia.

See here for our full coffee list that you can order for home.