The History of Coffee

Ever found yourself wondering about how coffee came about? How beans and brewing all began? Sit back with a cup of your favorite Jones Brothers Coffee and let us tell you a story because the smell and taste of freshly made coffee is one of life’s greatest pleasures, to be enjoyed even more when you understand the wonderful journey, history and heritage of the humble coffee bean.

Once upon a time…

There was a shepherd called Kaldi, who one day, when out with his goats, noticed that they all got very excited eating red berries. ‘This must be good stuff’, he thought so tasted them too and also got a bit of a buzz. Off he then went to a local sufi (Islamic Spiritual Master) who, a little curious himself, threw the berries into the fire. He was delighted by the aromatic smell that came from them and there marked the birth of the concept of roasted coffee!

The sufi took the roasted berries and mixed them with water to create a nice hot drink. He quickly realised their energising qualities and shared his find with his fellow sufis, who drank the roasted berry drink to help them with their pre-dawn prayers. Word spread and popularity grew and grew until Arab traders, around the years between 600 and 800 AD, started cultivating them in their land, more specifically at the port of al-Muka in Yemen, leading to the name of the berries, Arabica.

And then it spread…

From there, popularity spread to Syria and then to Turkey, where the berries were first roasted on an open fire and crushed and drank in a way similar to what we drink today. It was the Turks who really marked the birth of coffee shops, traditionally visited by men, who sat for hours and talked. Coffee became so popular in Turkey that every bride was entitled to her own coffee maker (barista) and the wealthier households had a designated barista just for preparing coffee for visitors.

As the Turkish Empire spread and people visited their lands, so did the fame of coffee and by the early 1600s, when the Venetians discovered it in their capacity as prominent European traders, Italy began to import it. The coffee was first sold by street sellers and although the clerics tried to get it banned as a drink from the devil, legend has it that as soon as the Pope had a sip, attempts of a ban well and truly failed. The pope had given coffee his blessing!

Coffee then spread to France and elsewhere in Europe as well as the UK and America. Today, it is the second most traded commodity in the world after oil.

The entire history of coffee is admittedly pretty patchy and full of myth and whilst it’s probably more likely that it was discovered over a period of time by people tasting various parts of the cherry, the legend holds far more romanticism and intrigue!

Psss… Try our 100% Arabica, UTZ certified dark roasted and medium-dark roasted coffee beans for a great trial price: Italian Lover, The Big Shot and The Awakening in this Discovery Pack for only €16,99! Great coffees are just one click away. Free shipping if it is your first order with us.

It’s all in the name…

As for where the name came from, the English term coffee evolved from the Arabic word qahwah, which was translated into Turkish as kahve and then as café in French, caffe in Italian, koffie in Dutch and kaffee in German.

Coffee grows on trees that flower and produce fleshy fruit called a drupe, commonly referred to as the berry when it is green and the cherry when it ripens to red. What we refer to as coffee beans are actually seeds, produced in the centre of the drupe. After harvesting, the flesh of the drupe is washed or dried and the beans extracted. There are two beans in each cherry.

The two major species of coffee are Coffea Arabica and Coffea Robusta. Robusta contains around double the amount of caffeine found in Arabica and as its name infers, is easier to care for. Arabica requires much greater care during cultivation and is of a far superior quality. Arabica is the species most associated with speciality or gourmet coffee and is what you’ll find in every Jones Brothers Coffee product here.

The only place where Arabica coffee grows indigenously is Ethiopia. Ethiopia is in fact, the only place in which coffee grows truly wild so all other countries that produce Arabica have transplanted plant stock directly from there. In this post, you can read all about these coffee-producing countries, an area known as the Bean Belt. 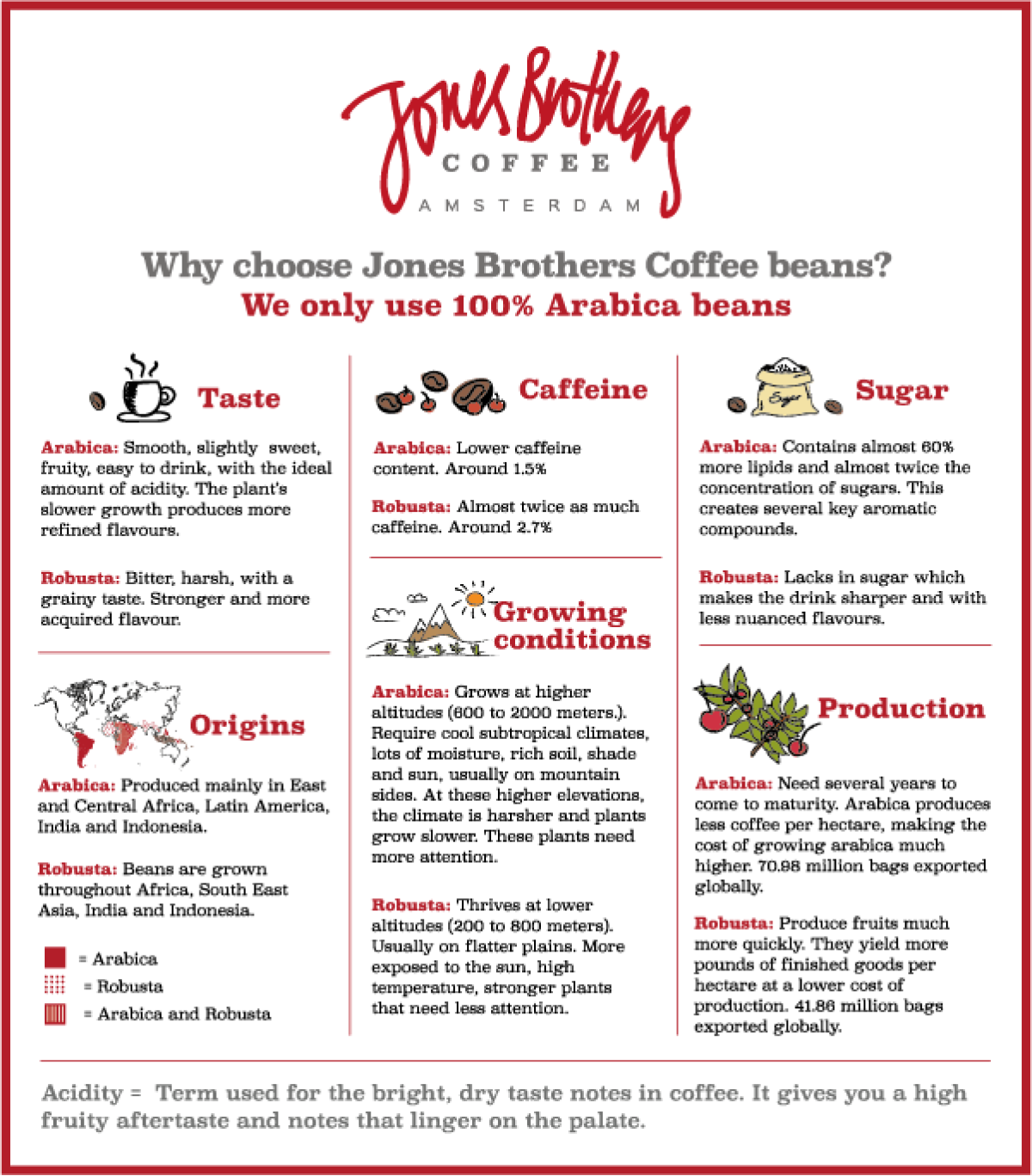 Love what we brew!